As one of the fastest-rising comics hailing from NYC, Sam Morril is set to kickstart his new comedy tour, The Class Act Tour, across the country as he serves his signature stand-up sets and hilarious jokes on the live stage. The man is coming to Moore Theatre on Friday, 3rd of February 2023. Sam Morril is one of the nation's sought-after comedy-gold stars with four stand-up specials and co-hosting a comedy podcast. Spending endless nights on rooftops and comedy clubs, Morril has remained dedicated to his craft and is set to deliver a class act on The Class Act Tour. Book your tickets now! 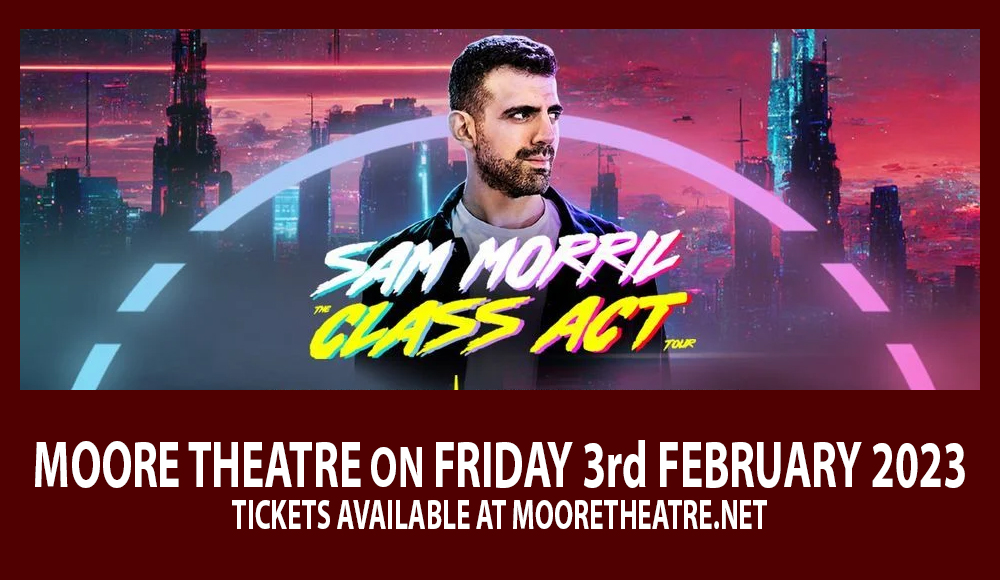 The New York-based comic, Sam Morril, is bringing his comedy-gold acts to the live stage on a new headlining "The Class Act Tour" across the country. As one of the nation's fast-rising stand-up comedy stars, the man has four stand-up specials and has made various appearances in TV shows. Named as one of Comedy Central's Comics to Watch in 2011, Morril has soared high since then, quickly rising to comedy fame over the past three years with a Netflix show "Same Time Tomorrow" on his roster of achievements.

The man has made various TV appearances on The Late Show with Stephen Colbert, The Late Late Show with James Corden, and Conan. He used to be a regular on Comedy Central's This Week at the Comedy Cellar, popping out often when he wasn't performing in various clubs, theatres, and comedy venues across the country.

His own show "People Talking Sports" on MSG ran for two golden seasons of comedy fun, receiving an Emmy nomination.

His second stand-up special released in early 2020, "I Got This" on Comedy Central, amassed over 1.5 million views in just two weeks on YouTube. In 2021, he released his third stand-up special "Up On The Roof", navigating performing live comedy sets during the pandemic. Morril also has a full-length documentary, Full Capacity, which tells tales of how live comedy is doing after clubs finally reopened in NYC after waves of pandemic shutdowns.

Sam Morril co-hosts a comedy podcast with Mark Normand named "We Might be Drunk".

As a fast-rising prominent name in the comedy industry, Sam Morril is set to soar higher and stronger as live comedy made its fierce and hilarious return to venues across the country.

Don't miss out on his very own "The Class Act Tour" by booking your tickets now!