Get ready to teleport to 'Beatopia' as the sensational indie bedroom pop artist beabadoobee is embarking on a headlining North American tour this fall in support of her new album Beatopia. The new album features her new songs "Talk", "See You Soon", and "10:36". Having warmed up hearts around the globe with "Coffee" and Powfu's "Death Bed", beabadoobee is set to take fans to Beatopia at Moore Theatre on Monday, November 21st, 2022. So, don't miss out on beabadoobee's bright new era, live on stage, by booking your tickets now! 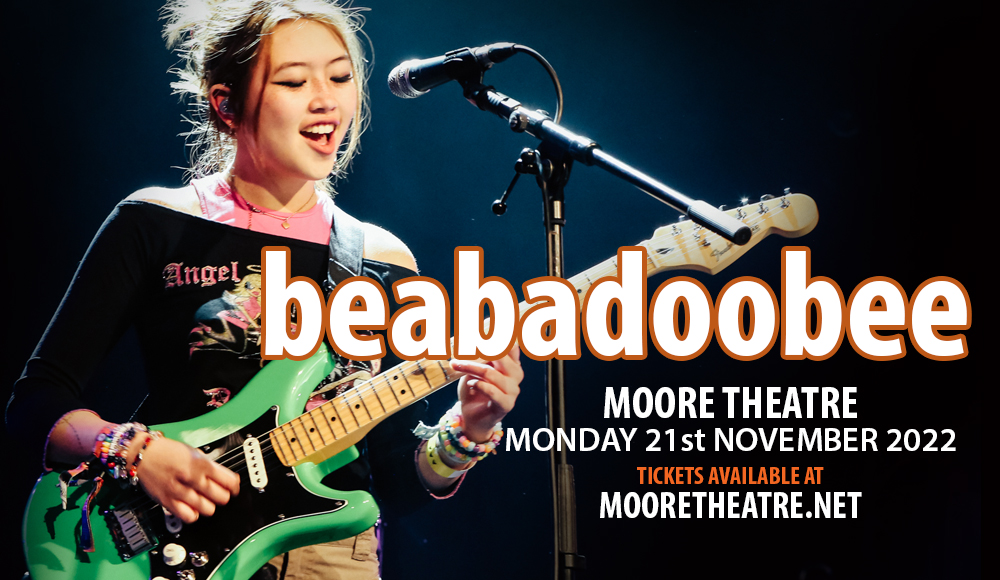 The Gen Z indie pop icon beabadoobee just released her new album "Beatopia" – pronounced as 'Bay-A-Toe-Pee-Uh'. The new record features her newest singles "Talk", "See You Soon", "Lovesong", and "10:36". Along with the new album out and about on the airwaves for fans around the globe to enjoy, the singer also shares a video for her new single "Sunny Day".

"Sunny Day is a song that I’ve always wanted to make but something that I’ve never done before." said beabadoobee. "Putting it on Beatopia was quite nerve wracking for me but I’m glad I did. We had written it during a week of crazy productivity in terms of creating songs, I had a session with Starsmith and the song just flowed naturally. I love it"

With a big new album marking a big new era for beabadoobee, the Gen Z star is set to embark on a series of shows this fall on her headlining North American tour – including this stop at Moore Theatre on November 21st.

Born in the Philippines and growing up in London since age 3, beabadoobee or Beatrice Lauss grew up listening to OPM (original Pinoy music), pop, and rock dating back to the 90s and 80s. "My mum got me obsessed with things from Alanis Morissette and the Beatles at a really young age." she told Impact. "I really got into music even more when I started watching films, things like the Juno Soundtrack and Wes Anderson films."

Getting her first guitar at 17 and teaching herself how to play the instrument with the help of YouTube, beabadoobee wrote her first song "Coffee" in 2017. The song quickly gained attention and scored her a record deal. "For me it all happened so quickly. I put my first song up online and it got picked up by a team and I really didn’t expect any of it." she shared.

Warming it up with a good start, Bea found her big break when "Coffee" was sampled by Canadian rapper Powfu's single "Death Bed (Coffee for Your Head)". The track became viral on TikTok, with her debut single "Coffee" becoming a sleeper hit.

When the track became a global hit and amassed billions of streams, beabadoobee shared "I'm not going to lie, it was overwhelming… I kinda hated it. I hated more people knowing about the first song I'd ever written and not my others. I was so stubborn but I grew into it and accepted that's just how life works. I was extremely grateful for its existence and it's only given me more opportunities."

From a great warm start serving 'coffee' around the world, she released her debut album "Fake It Flowers" in October of 2020. The album features her hit single "Care" and crowd-favorites "Worth It", "Sorry", and "How Was Your Day?".

With Beatopia fresh off the shelves, Bea is set to celebrate this big new era around the world, performing on live stages on tour. "I’ve been waiting for the release and for people to hear it!" she told Impact Nottingham. "We finished it right around Christmas last year, so it’s like this secret I’ve had to hold in but now I can finally get out."

So, don't miss out on the sensational beabadoobee performing live on stage, bringing along her fan-favorite hits and fresh new beats off of Beatopia at Moore Theatre by booking your tickets now!