Love The Monkees?! Well you're in for a well deserved treat as the original members Michael Nesmith and Micky Dolenz return to the stage to bring their beloved fans an evening of The Monkees incredible music! Join them for this very special showcase as they celebrate their prolific career, bringing all of their biggest hits for one night! Tickets are now available to book for their live date at the Moore Theatre on Saturday 4th April 2020! Secure yours for the greatest evening of your life! 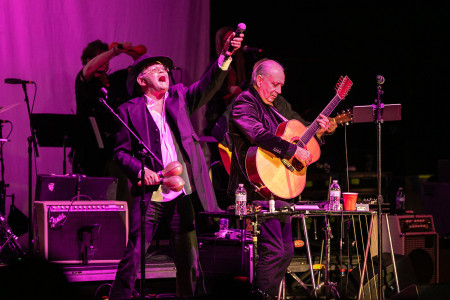 "Hey, hey, we're the Monkees
And people say we monkey around
But we're too busy singing
To put anybody down"

As one of the most memorable worldwide famous bands, The Monkees sure have made their mark on music history and have given us countless of hit songs throughout the decades.

First formed back in the mid 1960's, The Monkees were a part of the rock pop movement at the time, often featured on American TV shows and televised live performances. Together they first formed with actor/musicians Micky Dolenz, Michael Nesmith, and Peter Tork with English actor/singer Davy Jones. The original four deemed of being as big as The Beatles one day but they never thought it would become a reality. With their passion for music, it really did pay off and helped them to reach for their big time break – as we know now their career was transformed and has become legendary.

The Monkees are now known to be one of the biggest selling groups of all time, with their successful unstoppable mainstream success, they have transformed the charts with their hit songs such as "Last Train to Clarksville", "Pleasant Valley Sunday", "Daydream Believer", and "I'm a Believer" – along with many more! Their albums to date have sold over a whopping seventy five million all across the globe! Magazines and polls such as Rolling Stone Magazine have put them straight at the top and noted their sales topping The Beatles during the late 1960's.

Now fast forward to over five decades later in 2020 and The Monkees last remaining original members are coming to showcase their incredible iconic catalogue of music to the stage once again! Fans listen up as this opportunity to see The Monkees live is truly a once in a lifetime chance! If you love their unforgettable songs then be sure to book your tickets for their sensational dates!