The hilariously funny comedian duo of Colin Mochrie and Brad Sherwood comes to Moore Theatre on Saturday, January 14th 2023. Colin Mochrie is a Scottish-born Canadian actor, writer, producer and improvisational comedian best known for his appearances on the British and US versions of the improvisational TV show Whose Line Is It Anyway?. He spent seven years as a regular on the UK version of Whose Line Is It Anyway. Collin has appeared in dozens of television series and films, as well as theatrical shows. Bradley Sherwood is an American actor, singer, comedian, game show host and writer, and has appeared along-side Colin in both the British and American versions of Whose Line Is It. Bradley Sherwood developed a corporate show based very similar to Whose Line 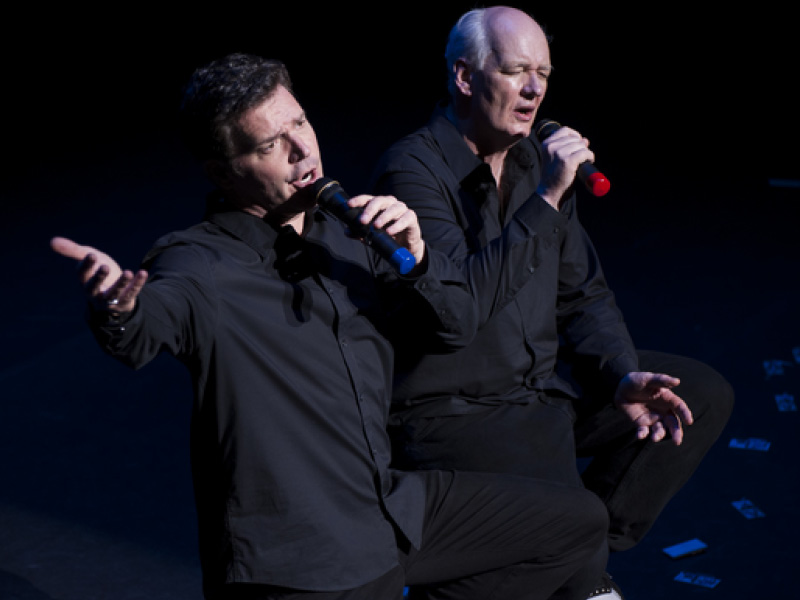 At secondary school, Colin Mochrie was persuaded by a friend to try out for a role in a play. He was hooked when he got his first laugh, which inspired him to pursue a career in entertainment. He later attended the Studio 58 theater school for four years, where he discovered the art of improvisational comedy. After auditioning three times and being denied a position, He earned a regular spot on the UK show, “Whose Line Is It”. He spent seven years as a regular on the UK version until it ended in 1998. He joined the American version of the show and worked with Bradley Sherwood, and appeared on every show until that closed in 2006. Mochrie and Whose Line co-star Brad Sherwood have intermittently toured North America as a two-man improv stage show since 2002.

Colin Mochrie has played in larger venues such as the Sydney Opera House and London's Royal Albert Hall and has featured in comedy shows in the UK, American and Canada. Mochrie's work has been recognized with numerous awards, including two Canadian Comedy Awards, a Gemini Award, and a Writer's Guild of Canada award. He was named Canadian Comedy Person of the Year at the 2013 Canadian Comedy Awards. Both Brad and Colin have been touring the world in the critically acclaimed, live, two-man improv show: Colin Mochrie & Brad Sherwood "Scared Scriptless"